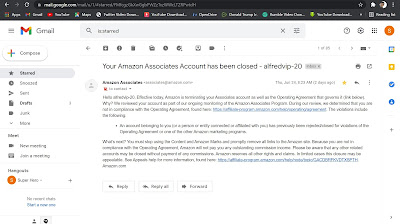 Click Here To Download: Amazon Associates Bans Me For My Beliefs & Who I Stand With - by Alfred

{Automated Transcript. Contains Typos. Not Yet Edited By A Human}:

the devil's children will come after you but the reality of the matter is that amazon is just a company you know and i should and i would start the company that will be bigger and better than it you know sales sales amazon.com is just the websites and the engine behind amazon you know can be easily replicated anywhere at any time

that is the fact you know um the the model of amazon which is just basically buying stuff from china destroying the us economy and you know selling them um on their website that is it's anyone can start the website and anyone can build an app you know the little things that amazon has done you know it is it's something that it is not extraordinary in any way you know it's easily replicated and apparently i would and i have to and you know it is important that christians do this um some days ago i used this amazon um associate i linked a url to it which was amazon.you know amazon.alfred.vip so it redirected to my an amazon associate link because you know amazon has accepts that you know so it is like putting that in um

believe the word be willing to throw away what anybody of any denomination sees if you see it you know if you if you if you observe that the word says something different you know stick to the word it doesn't matter if the what the person the person saying it is catholic or is the pope or is fro is um one of that denomination is pentecostal or baptist or whatever you should stick to the world you know and you will you need to get into the world yourself so um um that is that you know that being said you know we we need to understand the importance of taking over industry you know be the captains of industry you know be the ones who are the giants behind the twitters the facebooks you know the teslas and all of that it is important and it is part of the great commission without that kind of money and we turn that kind of pound influence we will not be able to beat the influence and the move and the united fronts that the devil is using those people to do like you can see they're all united with the lgbt look at how they're all united to be anti-trump soon if things continue those people and as the scripture shows us that people in such positions will be united against christianity and christians will now be persecuted once again and it will be worse than ever before so in the meantime the quality of life that we live before the rapture happens is up to us it depends on what we do if we decide to say where we are going to be persecuted and we fold our arms and leave all the people of the world to take all the positions of power and influence we are going to end up suffering we will still go to heaven but we suffer when we didn't need to i would not win as many souls as we could have you know so that being said let me just um end this here you know remember to go to alfred.vip you know and um reach out to us if you've not given a life to christ click the salvation prayer link in the main menu when you're at the page you'll come at the house of prayer salvation say that prayer and give your life to jesus christ thank you and god bless you