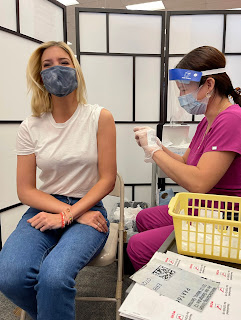 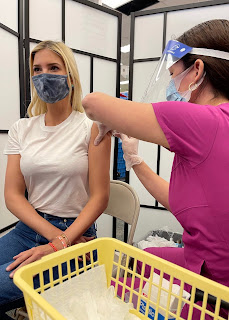 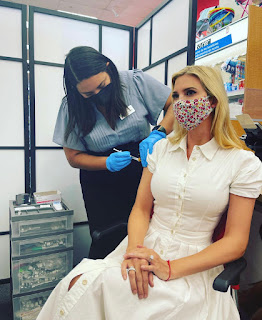 {Automated Transcript. Contains Typos. Not Yet Completely Edited By A Human}:

Ivanka Trump who is usually very silent and has been off social media ever since the outcome of the elections has posted yet another picture of her taking a dose of the vaccine.

A great deal can be said of what the Trump family did for America but it goes without saying that there are certain contributions that they made that's not useful for America but actually fall in line with the new world order.

One of those things is the vaccine.

In as much as Trump was strong and was a force in between the globalists/ the new world order and the American people, he wasn't what we call the most effective tool.

He was a very important tool but not the most effective and that's something that you can ensure always happens when there isn't 100% devotion and commitments to the cause of righteousness and the cause of Christ with zero compromise.

President Trump was ready to compromise on so many issues and to work together with the democrats; but the democrats were so hell-bent on making him look bad that they did a lot of things that undermined the safety and the well-being of the American people, but because the mainstream media was so negative about Trump much fewer people than should have actually noticed how the democrats placed their personal careers and NWO vision above the lives of everyday Americans time and time again.

When it came to everything from stimulus checks to the shutting down of the government which most people have forgotten; it was actually because of the democrats not willing to budge and work with President Trump for fear that it would make him took good if they work together and he solves the problem.

Democrats just loaded their bills with their leftists ideologies and refused to adhere to anything that Trump or Republicans wanted. There was no provision for anything republican or anything that is genuinely Pro-America.

That being said, the uncontrolled promoting the vaccine is clearly in line with what the devil wants. Christians and Americans have no business taking any vaccine. It is funny that the use of vaccines as the only acceptable solution is still being pushed in as much as there has been numerous alternatives to the vaccine and numerous medical treatments that are actually effectively and has been proven to effectively deal with the Coronavirus. Not to even mention the fact that the virus itself became weak and ineffective especially after the prayers of the saints and the declaration by the great Kenneth Copeland when he spoke and made a declaration about the virus. The strength of the virus weakened and it became such that many people who had the virus never knew that they even had the virus and their immune system fought off the virus and defeated the virus.

The virus itself became weaker than the common cold.

It only was effective in those who believed in it and those who went to hospitals.

As a matter of fact, many people who went to hospitals who died is as a result of the Doctors and the medical personnel following the advice from the WHO.

Have you ever sat back to wonder why it is that it is the nations that have the best medical facilities and the wealthiest nations that were hit the most by the Coronavirus.

For other nations that had limited or little medical facilities the Coronavirus was not a problem. How is that possible?

As a matter of fact, not only where in most cases COVID -19 patients not treated; in the caseS where they were treated they were given the wrong treatments. Things like the hydroxychloroquine was off the table because President Trump mentioned it, it was condemned even though it is actually the same drug that is used to cure malaria and has been used to battle malaria in Africa for decades upon decades and has always proven itself to be effective. All of a sudden it became something that was condemned; that it is unsafe while it had been used in Africa for decades to address malaria and it worked.

However anything that can be used to insult Trump is you know what most people would happily go for.

That being said, it is actually because of the WHO and the so-called medical personnels that people trust that so many people died.

Also note that there were actually programs that gave hospitals medical aid and a lot of finances depending on the number of COVID-19 patients they had. Therefore, hospitals were incentivized in that direction and a lot of shady things happened. A lot of people got rich. A lot of investors in the medical profession got rich and now the vaccines is a way for a lot of big pharma companies to get even richer.

A lot of governments are going into all kinds of deals with big pharma for the supply of those vaccines. Those governments will eventually pay for it with Tax payer money (aka your money) either in the long run or at present they are already paying a lot of companies who are getting richer off something that is not a big deal in the first place and there are many alternatives for.

Facts and Information about all the alternative ways to address the Coronavirus has actually been put down so that those who spent all their money investing in vaccines like Bill Gates can actually make more money.

Bill Gates has also predicted again that their would be another pandemic. That means he and his friends are planning a new one just like they planned & created the previous plandemic.

Why won’t people fall for it again since Bill & Friends control the media and people are so gullible?

The people of this generation are so gullible they happily believed all the global warming nonsense therefore what stop them from believing any other nonsense they shove down their throats.

You know, last year in 2020 a document leaked showing the intentions of The Great Reset and the announcing of a new variant of the COVID-19 scheduled for 2021, way before it was 2021.

The Globalists say anything without proof and everybody is supposed to obey a whole bunch of stringent laws that robs people of their individually & liberty in the name of protecting people while a few people are getting super rich of this and those same people are proposing socialism and saying that people should not be rich yet they have millions and billions. They are making so many deals in plain site and behind the scenes.

Barack Obama went into the White House as somebody who just had a few thousands to his name but he came out of the White House a multi-millionaire and nobody wants to ask questions about how does somebody do that when the Presidential salary is not a muti-million dollar salary.

Nobody wants to ask questions about Hunter Biden and all the shitty things that he's involved with, and also about Joe Biden.

Politics and politicians are just being trusted based on what the mainstream news story is, especially when the fake news media use a story that pulls at people's heart strings.

If you blame white people for something… if you use the racism angle; you can make people do anything…

{Automated Transcript. Contains Typos. This Part Has Not Yet Edited Been By A Human}: